St.Patrick was a Welshman... 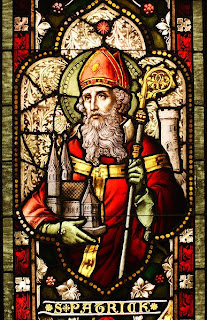 On March 17th, when St. Patrick's Day is widely celebrated in Ireland and so many Irish communities around the world, most assume that St. Patrick was an Irishman. It is not so.

Though Patrick's birthplace is debatable, most scholars seem to agree that he was born in the area of southeastern Scotland known as Strathclyde, a former Celtic kingdom and Welsh-speaking at the time. (However, a few scholars continue to regard St. David's in Pembrokeshire as the saint's birthplace; the tiny city was formerly directly in the path of missionary and trade routes to Ireland).

When the city of Rome fell to the invading Goths under Alaric, Roman Britain, which had experienced hundreds of years of comparative peace and prosperity, was left to its own defenses under its local Romano-British leaders. One of these may have been a tribal chieftain named Arthur, who seems to have held off the invaders for a while. Centuries of constant warfare, however, meant that the majority of the British kingdoms eventually crumbled under the onslaught of Germanic tribes.

More than two hundred years of fighting between the native Celts, brave but always completely disorganized, and the ever-increasing number of highly organized and disciplined German settlers eventually resulted in Britain sorting itself out into three distinct areas: the Britonic West, the Teutonic East and the Gaelic North. These areas later came to be identified as Wales, England and Scotland, all with their very separate cultural and linguistic characteristics. (Ireland, of course, remained Gaelic: many of its peoples migrated to Scotland, taking their language with them to replace the native Pictish).

Many scholars believe that Patrick (Patricius or Padrig) was born in the still Welsh-speaking Northern Kingdom of Strathclyde of Romano-Brythonic stock around 385 AD at a place called Bannavem Taberniae (Banwen). His father was a deacon, Calpurnius. Not much is known of Patrick's early life, but it is believed he was captured and sold into slavery in Ireland. Escaping to Gaul, he then underwent religious instruction under Germanus and returned to Ireland to join other early missionaries, probably settling in Armagh. In his Confessio, a spiritual biography, Patrick describes his early adventures. His seventh century biographers claimed that he converted all of Ireland to Christianity. Other Information concerning his life comes from the Latin, "The Life of St. David", written in the late 11th century by Rhigfarch (Rhygyfarch) but supplemented by Geraldus Cambrensis around 1200.

In "The Life", Patrick is told of coming to Wales as a bishop and vowing to serve God at Glyn Rhosyn (now St. David's). But, he was warned in a dream that the place was reserved for someone who would arrive thirty years later. He was then shown Ireland in the distance by an angel as he stood on a rock called "the seat of St. Patrick." Patrick's mission was to evangelize the distant land, a task that he carried out in a remarkably short period.


Rhigfarch is also responsible for what little we know of St. David, adopted as the patron saint of Wales in the 18th century. David died about 590 AD with March 1st, the reputed day of his death, celebrated by a holiday in Wales. St. Patrick's Day is much better known. It has become an American national festival celebrated with monstrous parades silly green hats, fake shamrocks and prodigious amounts of alcoholic beverages, including -- horror of horrors -- green beer. 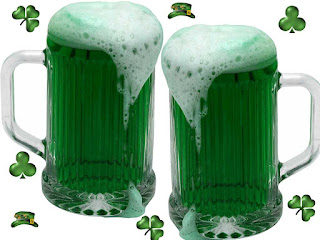