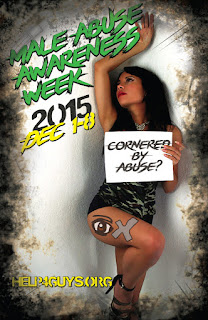 
Help4Guys.org (formerly the P. Luna Foundation) believes that Male Victims of Abuse should no longer be silent. Every day we give a voice to these isolated individuals because by doing so they are more likely to work through their problems and get the help they need. We strive to prevent or relieve the crippling effects of past and current abuse like; serious psychological problems, relationship problems, drug addiction, suicide and the random cycle of abuse.
We also wish to inspire people and organizations that provide help services to female victims and survivors to start offering specialized services for abused males, if you do not already. If you are a service provider, we offer information here to help you start to understand some basics of how to deal with the special needs of male victims and survivors of all forms of abuse.
The P. Luna Foundation started Male Abuse Awareness Week, Dec 1-8 in 2008 and are the official organizers of this annual awareness campaign.
Get involved and Follow them HERE
Posted by Beyond Survivor at 11/30/2015 09:28:00 am No comments:

It is estimated that One in Four adults has experienced child sexual abuse* (CSA). We are proud to announce the launch of Survivors’ Voices, which features the narratives of fourteen survivors with an analysis of the findings. There is also a supplement with eight further narratives. Most survivors mentioned that they had seen many professionals before they received the help they needed. An important outcome from this project has been the development of a pocket guide for professionals, partners families and friends.

For too long child sexual abuse (CSA) has been unrecognised or not fully understood, now One in Four has given survivors an opportunity to tell the world of the impact childhood sexual abuse has had on their adult lives.Survivors’ Voices is an important REPORT that brings together the narratives of women and men who have survived abuse in the family environment, which accounts for 70 percent of CSA.
Written in their own words, Survivors’ Voices is a powerful testament to the devastation of CSA and its impact, not only on the individual, but also to those around them and wider society.
Survivors’ Voices includes an analysis of the themes that emerge from the narratives. A strong commonality between the narratives is length of time it has taken to find appropriate professional help and counselling. As a result of this One in Four has produced a pocket guide for professionals.
Survivors’ Voices is available to view or download HERE.
Follow OneInFour on Twitter @WeAreOneInFour
http://www.oneinfour.org.uk/
Posted by Beyond Survivor at 11/25/2015 10:43:00 pm 2 comments:

Tomrrow (17th November) is the publication of the GLA report “Silent Suffering – Supporting The Male Survivors of Sexual Assault” which estimates that between 2010 – 2014 there were 679,051 sexual assaults and rapes of males un England and Wales, 96,103 in London alone.

SurvivorsUK welcomes the publication today of the GLA report “Silent Suffering – Supporting The Male Survivors of Sexual Assault” which estimates that between 2010 – 2014 there were 679,051 sexual assaults and rapes of males un England and Wales, 96,103 in London alone –http://glaconservatives.co.uk/wp-content/uploads/2015/11/Silent-Suffering.pdf
This first of its kind report, specifically examining the prevalence of sexual assaults affecting males in London and some of the barriers that stop them from reporting and/or seeking support to manage the effects of their experiences, clearly points to shortcomings in existing provision that work against the benefit of male survivors of these assaults.
We endorse the recommendations contained in this report and hope that they will be acted on quickly to ensure more robust support for male survivors.  We object, however, to assertion made in the report that the onus lies on voluntary organisations to manage to do more with less in a climate of uncertain funding.
Michael May of SurvivorsUK says – “This welcome report highlights some of the issues affecting male survivors of rape and childhood sexual abuse that we have been pointing out to MOPAC for some years now.
In 2008, Mayor Boris Johnson said in his manifesto that “…There is also no doubt that victims of rape feel ignored, and they need long-term help and support to re-build their lives.”  He then went on to outline how he would raise the funds necessary to launch 3 additional female only rape crisis centres in London, to increase the support provided through the existing centre and to sustainably fund the provision of support through these centres on an on-going basis.  He stressed that long term, sustainable funding for these centres was important to allow for the uninterrupted provision of support and to allow these centres to plan and implement services.  He said – “It is in sharp contrast to the present situation in which funding decisions are often made midway through the financial year – meaning that Rape Crisis Centres are forced to survive hand-to-mouth and often face the threat of imminent closure.”
Since then the Mayor has spent more than £5m ensuring that these services continue to provide invaluable support to female-only victims of rape and sexual abuse and continues to provide more than £1.25m per annum to fund them.  These services are in addition to those separately funded through the London Haven’s which MOPAC notes “… provide crucial medical care and support to victims of rape and serious sexual assault and … are complementary to those of the Rape Crisis Centres.”  Clearly Havens are not seen as a replacement for the specialist counselling offered to female victims through Rape Crisis Centres.  The same does not seem to be the case where the victim is male.  MOPAC’s Natasha Plummer wrote to SurvivorsUK recently and noted that MOPAC funded specialist services were in fact available to men and boys – through the Havens.
The current lack of specific funding for counselling support for male victims of rape and sexual abuse begs the question whether the Mayor no longer believes that “… victims of rape … need long-term help and support to re-build their lives”.  8 years ago he said “It is nothing short of a disgrace that the government has cut the funding for Rape Crisis Centres in London”.  I now believe it is a disgrace that this administration has provided only £32,000 to support male victims through the provision of specialist counselling in 8 years and is currently providing nothing more.”
The “Mayoral Strategy on Violence Against Women and Girls 2013-17” notes that, in addition to the services provided through Havens,  “Further plans for supporting male victims of sexual violence in London will be developed over the next year following the completion of the review into victims’ services currently being led by Baroness Newlove.”  That report, published in July 2014, notes as its first recommendation that “Commissioning should address key gaps in provision, including support for: young victims; victims of hate crime (and particularly victims with disabilities); repeat victims; victims of trafficking and exploitation; and male victims of abuse.”  In the full text of the report, on-going mention is made of the needs of male victims of sexual violence and the current lack of funded provision.
The Violence Against Women and Girls Strategy noted above states – “the Mayor also recognises that men and boys may also be victims of sexual violence and should be offered appropriate support. The London Havens offer a service to all victims of rape and serious sexual assault including men and boys.”  “Appropriate support” for men and boys appear not to include long term specialist counselling which is at the centre of MOPAC’s support for female victims of the same crimes.
In recent correspondence, Ms. Plummer notes that in addition to the Havens provision, Respect have been funded to develop service standards for organisations working with male victims of domestic violence and male victims could access the services of Victim Support.  We would point out that Respect has to date developed guidance for domestic violence only and that Victim Support is clear that they do NOT provide counselling.  Ms Plummer also notes that “…it is not possible to ascertain how much of the £4.1 million currently being invested in specialist services for all victims of domestic and sexual violence will be used to support male victims.”
We call on MOPAC as a priority to make funds available to provide long term, specialist support to male victims of rape and sexual abuse.
ENDS
For further information, please contact Michael May at Michael.may@survivorsuk.org or on 020 3598 3898 or 07986 614 093.
Source Survivors UK
Posted by Beyond Survivor at 11/16/2015 06:02:00 pm No comments:

I wish my brain had a delete button.. #childabuse #memories

Trauma memories can surface at any time. Personally I have found that when under extreme stress in daily life, I am more likely to have flashbacks and the simplest thing can trigger a memory. Thankfully I have learnt techniques that keep me safe and grounded most of the time.

Recovery from child abuse trauma and the frequently ensuing PTSD and other after affects means that we have to face our demons and relive much of the trauma in order to deal with it in a safe manner and reduce or stop it's impact on our lives today.

I find writing to be incredibly therapeutic. By writing out the memories I seem able to take away much of their power. One memory I have not shared before. The abuse I endured was varied in nature. There was sexual abuse, physical abuse, emotional abuse and also combinations of the three.

As a child my feel turned in quite badly. I also spoke far too fast for most people to understand me (apart from when I was in full on stutter mode)..

Grandfather kept an old polio leg caliper in his workshop. At his whim I had to wear it. It had belonged to a cousin of his who had lived with my grandparents for a number of years. His brother, a Calvinistic Minister, had suggested to him to use it on me during one of our visits to see him to give me my "spiritual lessons".. The caliper fitted badly and rubbed harshly against my skin. I would only be wearing underpants (or less) and he would make me walk around wearing the contraption. Sometimes he took his "game" further and in the interests of not triggering others I will say no more about what these events led to. He simply delighted in humiliating me.

Life has had some very stressful moments recently and since yesterday I have been able to feel the caliper rubbing against my leg and causing me to limp a lot of the time. The pain is real. The body often remembers things that our brain hides from our consciousness. I hope that by sharing this I will be able to minimise the discomfort and also shelve the memories where they belong - firmly in the past. 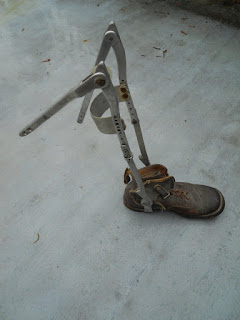