I was sent this by a new twitter friend, @tjacinto Thank you for sharing!


The common myth is that the Desiderata poem was found in a Baltimore church in 1692 and is centuries old, of unknown origin. Desiderata was in fact written around 1920 (although some say as early as 1906), and certainly copyrighted in 1927, by lawyer Max Ehrmann (1872-1945) based in Terre Haute, Indiana. The Desiderata myth began after Reverend Frederick Kates reproduced the Desiderata poem in a collection of inspirational works for his congregation in 1959 on church notepaper, headed: 'The Old St Paul's Church, Baltimore, AD 1692' (the year the church was founded). Copies of the Desiderata page were circulated among friends, and the myth grew, accelerated particularly when a copy of the erroneously attributed Desiderata was found at the bedside of deceased Democratic politician Aidlai Stevenson in 1965.
Whatever the history of Desiderata, the Ehrmann's prose is inspirational, and offers a simple positive credo for life. 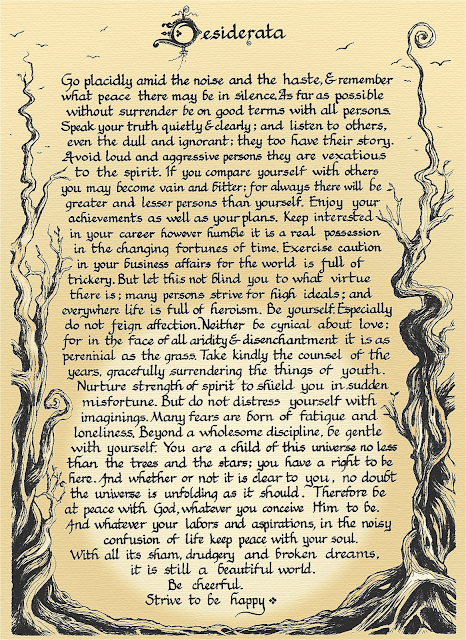 Email ThisBlogThis!Share to TwitterShare to FacebookShare to Pinterest
Labels: Other sources

I have always loved this poem and what it says.