Mary Ann has kindly allowed me to share her work. She writes extensively and further links to her writing can be found below. This is Mary Ann in her own words.

I am a survivor of multiple sexual assaults including incest and other forms of family violence. At ten years old I watched my 12 year old brother who was my best friend die in an avalanche. By the age of ten I had experienced what seemed like a lifetime of traumas. My mind shattered. I began the process of survival through years of struggling with Complex Post Traumatic Stress.

I have been a feminist activist for over 25 years. I am now 45 years old and all these years I battled with PTSD, I tried to keep it hidden for fear that I would be judged. The shame of the sexual abuse was too much, and even though I fought the lack of justice for survivors of sexual abuse, I never came out.

The time has come where I feel I need to come out as a survivor of child sexual abuse and other forms of violence. Not only do I want my survivor’s voice to be heard, but I want to encourage all survivors that have not found their voice to speak up. We hold the shame of our abusers, and it is not ours to hold. Let it go.

It all sounds quite gloomy. But in fact, I have grown to love the person I have become. I have survived the violence, but most importantly I have survived the battles of my mind. I learned to appease the sadness and anger, and channel it for good by helping others.

I have been writing since the age of 12. I usually write comical prose, stories about poetic justice and non-fiction pieces on a variety of subjects. I have only begun sending my writing out for publication. My goal is to one day publish a collection of stories about living with Complex Post Traumatic Stress. I should be writing disorder, but it is not a disorder it is a survival mechanism that helped me cope under overwhelming strain as a child and as an adult. I have a twisted sense of humour which comes out in the essays and short stories I write. This comical twist keeps me sane in light of overwhelming flashbacks that grab hold of me and try to pull me down.

Besides writing, I have a day job as a Union Representative for the CSN employees at a hospital. Fighting peoples rights has been my calling, which I have fully embraced with all the energy possible.

I live in Montreal, Quebec, Canada with my partner, Diane, of 18 years. My two loves are Dante and Guizou, my cats who try to control my life and actually succeed. I am proud of who I have become, I like being me with all my imperfections. In the great words of Oscar Wilde, “Be yourself, everyone else is taken.” 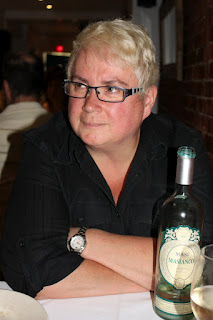 
Mary Ann writes extensivly. More of her writing can be found via the links below.

Email ThisBlogThis!Share to TwitterShare to FacebookShare to Pinterest
Labels: Stop Child Abuse, WELCOME TO MY GUEST

I was fortunate to have heard Mary Ann Davis read her essay to a group of writers. I remember how there was a deep hush in the room, as we realized her courage in telling her story, and the beautiful words she chose to express her lifelong struggle. Mary Ann is a writer to watch - I wish her continued success in connecting with her readers, and in having the strength to be honest and open.

Wonderful true and brilliant story my brave and wholesome warrior! We who experienced trauma know how to bless the myriads of others coming into adulthood and old age with this legacy. Your humour and toughness is awsome. I would love to post this on my site http://johndwmacdonald.com If you are interested contact me directly on johndwmacdonald@gmail.com Keep up the fabulous posts! ( And well done Jan - again)