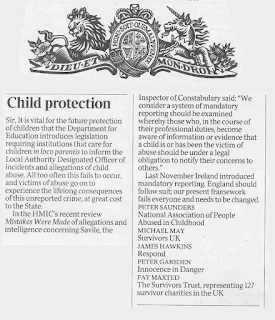 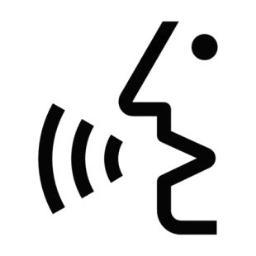 If you work with children, and see one of your charges being abused or even raped, you might think you and your employer had a legal obligation to report it to the authorities. Not so. There is no legal requirement on anyone working with minors in England (Wales or Scotland) to report allegations or witnessed abuse of a child, including rape, to either the Local Authority Designated Officer  (LADO) or the police.


Legislation is urgently needed which requires staff in faith groups, national sports bodies and clubs, schools and all similar institutions which are defined as ‘Regulated Activities,’ to inform the LADO of all concerns, allegations and incidents of abuse so that experienced and independent assessment is introduced immediately to ensure perpetrators are stopped as soon as possible.

In the recently published review undertaken by Her Majesty’s Inspectorate of Constabulary into allegations and intelligence material concerning Jimmy Savile between 1964 and 2012 entitled ‘Mistakes were made,’ recommendation #3 of just five states:

‘We consider that a system of mandatory reporting should be examined whereby those who, in the course of their professional duties, become aware of information or evidence that a child is or has been the victim of abuse should be under a legal obligation to notify their concerns to others.’

It is estimated that only 5% of child abuse is reported, yet Serious Case Reviews repeatedly reveal that professionals and others suspected years before that abuse was taking place but failed to inform the authorities. This is why outrageous child sex offences have gone undetected for years. In many cases, such as Hillside First School in Weston super Mare, the abuses continued for more than a decade.

All too often when an allegation is reported to the person in charge of a ‘Regulated Activity’, the LADO is not informed because there is no clear legal mandate for anyone to do so - and no legal sanction if they do not.

This lack of legislation seriously undermines the culture of child protection in all Regulated Activities where children are cared for by responsible adults other than their parents. For anyone who finds this state of affairs challenging to absorb, please refer to paragraph #5 page 3 of the NSPCC’s Introduction to Child Protection Legislation in the UK (May 2012). The lack of clear legislation presents all Regulated Activities with a conflict of interest when the worst happens.

The government’s current approach to child protection is grounded upon statutory ‘guidance’ rather than law. This cannot match the cunning and deceit of committed perpetrators, nor does it offer clarity of action to well meaning but unsupported professionals.
Instead of trying to change human nature, legislation needs to be introduced with policies and procedures that acknowledge the host of conflicting human dynamics that arise when faced with concerns of abuse.

• Mandatory reporting of allegations and concerns will address the distorting factors in what can appear to be complex situations. A headteacher or a bishop might wish to protect his colleague’s or church’s reputation but if he risks a criminal conviction and a hefty fine by so doing then he will think it a poor exchange.

• Under a system of mandatory reporting, staff in schools or hospitals who suspect abuse would have no choice but to report or face prosecution. This means every employee is better protected from blame. Being faced with a conviction, prison or a fine cuts across friendship or loyalty to an institution, and there is no doubt where duty lies.

• A criminal sanction for failure to report also removes any perceived need to weigh up whether the concerns reported are serious enough, or who to believe before having to decide what to do: the person reporting is freed from having to make complex judgements about who is telling the truth

Too often the decision is made to cover up and/or minimise wrong doing including any abuse of power perpetrated by officers and staff of the regulated activity. This is true for failures in schools such as Hillside First School Weston Super Mare and churches including the Diocese of Chichester and the Archdiocese of Birmingham, Local Authority children’s services such as Rochdale, Haringey, North Wales, and public service institutions such as the BBC and the NHS which also have questions to answer as the Savile inquiries continue to reveal.

Countries which operate mandatory reporting include Argentina, Australia, Canada, Denmark, Finland, Spain, Sweden, USA, and now the Republic of Ireland which on the 10th November 2012 held a referendum which approved mandatory reporting.

Failing to refer in the Republic is now an offence which carries a tariff of up to five years imprisonment. The new law will positively impact the culture of safeguarding in all institutional settings in Ireland.

The day before the referendum The Guardian published this article on the vote
in which Tanya Ward, the chief executive of the Children's Rights Alliance suggested the whole of the UK should embrace mandatory reporting ‘because institutions tend to put their own interests before those of children.’

In England (Wales and Scotland) children are on their own and have no legal right to expect the LADO to be informed of their suspected or discovered abuse.

It is vital for the future protection of children that the Department for Education introduces legislation requiring all ‘Regulated Activities’ inform the LADO immediately of all incidents of known or suspected child abuse. The objective is to reduce the number of victims of abuse in these settings who go onto experience the lifelong consequences of unreported crime at great cost to the State.

We are requesting you urgently draft legislation that reflects the reality of our society rather than the make believe world that the legislation addresses in which professionals know best, most people do the right thing and everyone would protect a child at risk of harm. The cases that have come to public attention over the past year (Savile Inquiries, Rochdale SCR, Hillside First School SCR and Mid Staffs Hospital Inquiry report) clearly evidence that this is not the case. The current discussions around strengthening the ‘whistle blowing’ legislation have also highlighted the many conflicting interests and pressures that stop people reporting serious concerns but ‘whistle blowing’ legislation on its own will achieve little. Not having legislation that reflects these realities means staff are currently unsupported when faced with the difficult task of referring internally, and then the administration of the Regulated Activity is conflicted when deciding whether or not to inform the LADO of the worst possible news for any institution.

Only when we acknowledge that the objective aim of protecting children can so easily be undermined by the subjective realities of the real world, will we begin to develop intelligent legislation and guidance. It needs to cut through the dysfunctional dynamics, negative culture and careless indifference that surround child abuse, and face up to the realities of the crime. When this is achieved we will begin to address the shocking scale of unreported child abuse in this country which destroys the lives of many tens of thousands of children every year at incalculable long-term costs to society.

Our European neighbour the Republic of Ireland has just introduced mandatory reporting, an example we urgently need to replicate for the protection of our children.

Email ThisBlogThis!Share to TwitterShare to FacebookShare to Pinterest
Labels: NAPAC