When will we start listening to children who are abused? #childabuse

I wanted to share this article I read in the Guardian newspaper a month ago. The original content can be found HERE and all rights belong to Julie Bindel and The Guardian.

If you have been a victim of this vile, predatory paedophile (or any other) please contact a support group such as NAPAC, The NSPCC or similar. There is support available and you WILL be believed! 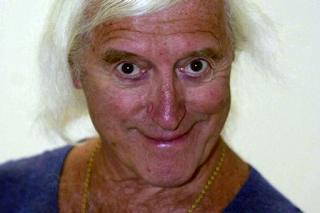 Jimmy Savile, the television presenter and media personality, knighted for his charity work for sick and disabled children is to be exposed as a prolific sexual abuser of girls as young as 12 in a documentary this week. This news will not come as a shock to many, as the rumours about Savile have been in the public domain for decades. That's the truly shocking part of this story – so many people either knew or suspected the fact that Savile was assaulting underage girls but chose to do nothing whatsoever about it.
A number of Savile's former colleagues interviewed for the documentary admitted that his predatory behaviour towards young girls was an open secret at the BBC. Wilfred De'Ath, who worked with Savile in the 1960s, told of how he spoke to a girl he believed to be 12 years old while she was in bed with the presenter the morning after he had seen Savile with her at a restaurant, describing her as like a "little lost soul". De'Ath admitted that it was "common gossip" that Savile was an abuser. Still, it appears that neither he nor any other colleagues reported him either to the BBC bosses or police.
It is a shame that the evidence against Savile was not tested when he was alive. In 2007, Surrey police received a complaint from a woman who said she was sexually assaulted by Savile at an approved school that Savile regularly visited in the 1970s, but the Crown Prosecution Service decided there was insufficient evidence to take it forward.
Esther Rantzen hits the nail on the head in an interview about the revelations when she says, "in some way we colluded with him as a child abuser" and that, "We made him into the Jimmy Savile who was untouchable, who nobody could criticise." But it is not only celebrities who are protected from justice. Throughout society, there is a culture of denial, minimisation and disbelief around child sexual abuse. It would seem that child sexual predators are often better protected than their victims.
Savile is not the only one in show business about whom rumours were rife before those alleging child sexual abuse came forward. Jonathan King was sentenced to seven years in prison in 2001 for the sexual assault of five teenage boys between 1983 and 1989, but after his arrest dozens more came forward and said it had happened to them too. Apparently it was no secret that King groomed young boys for sex among those in the music business.
In 1999 Gary Glitter was convicted on 54 counts of possession of child pornography. At time of his conviction several of those who used to work or socialise with Glitter said it was well known that Glitter sought out young girls for sex.
Why do we so often fail to act when we suspect or even know that children are being sexually abused? Nothing prompts the question more than the disgraceful example of the grooming gangs in Rochdale in which scores of girls were drugged, raped and sold by men who were afforded better protection than their victims were until the criminal justice system and child protection agencies were forced to act. In 2008, one victim of the most serious abuse and exploitation reported to the police and another agency that she had been the victim of serious sexual assaults by adult men but the focus was more on her behaviour than of the abusers.
The testimonies of the women that appear in the Savile documentary are heartbreaking. One spoke of how she was raped by Savile, but that she blamed herself because "no one blamed him." Another was locked in an isolation unit for days at her approved school when she made allegations about Savile in the 1970s, because she was assumed to be lying, as are so many abused children both then and now. "No one believed me then and I don't expect anyone to believe me now." Unless we start listening to children, in decades to come we will be hearing the same tragic stories.
Posted by Beyond Survivor at 10/30/2012 12:28:00 pm