Why a Christmas Tree? #Christmas 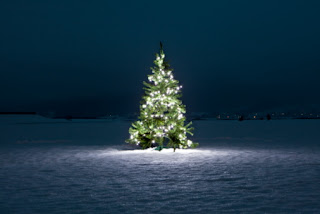 The custom of having a tree as a central focal piece in winter holiday celebrations can be traced back hundreds of centuries. The ancient Egyptians had a custom of bringing branches from palm trees into their homes on the shortest day of the year each December. The Chinese and Hebrews from ancient history had similar traditions, too. The Scandinavians are attributed with beginning such customs as the Advent Wreath and the Yule Log, and were known to decorate their houses and barns with evergreens during winter celebrations. The Vikings of Northern Europe believed the evergreen to represent the promise of the return to spring once winter had passed. In Italy, Romans decorated trees with candles and trinkets during Saturnalia. The Druids, in France and England, dressed oak trees with fruit in honor of the gods of harvest. Boughs from trees were use in several other Pagan winter festivals as well.

There is a bit of contention as to whether the Christmas tree originated from Pagan celebrations or from Christian influence and is muddled with legends such as the ones involving Saint Boniface. 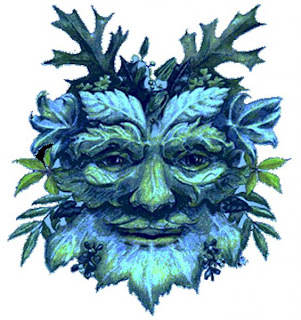 Saint Boniface was an English monk from Crediton, Devonshire, sent to Germany in the 7th century to spread the Word of God. There are two well-known stories born from his visit. One is rather farfetched and the other is more closely related to true facts.

In the former legend, Saint Boniface is said to have come upon a Pagan festival centered around an oak tree in which a child was about to be sacrificed. In order to stop the revelers from killing the child, he smashed the oak tree with his fist and fell it with a single blow. In its place a fir tree grew. Saint Boniface then told the people that it was the Tree of Life and represented the life of Christ. 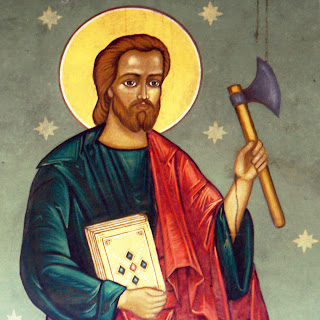 The more realistic legend indicates that Saint Boniface spent a great deal of time in Thuringia, an area later to become the leader of the Christmas decoration industry. He used the fir tree in his ministry as an analogy of the Holy Trinity with each corner of the tree's triangular shape representing either the Father, the Son, or the Holy Spirit. Because of the Pagan reverence for the oak tree, the analogy was an easy transition to make for the newly converted. They began to refer to the fir tree as God's tree. By the 12 century, an inverted fir tree was hung from ceilings at Christmas as a symbol of Christianity.

Another Christian given credit for the Christmas tree was Martin Luther, the founder of the Protestant movement, at Riga in Latvia in 1510. The story tells of his wandering through a forest one evening and noting how the stars sparkled through the limbs of an evergreen making it appear as though the tree were bejeweled with light. So inspired by the sight, he cut down a small fir tree, took it home, and decked it with tiny candles so that he could share it with his children.

The first Christmas tree as we know it today appeared in Alsace in 1521. In current geographical mapping, Alsace is in France, but, in 1521, it was in German territory. The tree was introduced to the local courtesans by Princess HélÃ¨ne de Mecklembourg who brought one with her to Paris after her marriage to the Duke of Orleans. Ten years later, the first printed mentioning of Christmas trees was published.

By the end of the 16th century, Alsace and surrounding communities had sorely abused their resources of evergreens. So popular was the custom of bringing trees into their homes to decorate that an ordinance was passed to keep households from having more than one tree. Because of the scarcity, some families erected Christmas pyramids instead made from plain, wooden structures, which they then adorned with branches and candles.

With the 17th century came a surge of inventiveness in the field of Christmas decoration. Christmas markets were held in German towns to provide villagers with gifts, food, and holiday trinkets to place on their trees. Bakers made gingerbread in various shapes and molded wax ornaments for the villagers to purchase. The most accurate record of such a fair was by a visitor to Strasbourg in 1601. In his notes, he made mention of a tree covered in wafers, sugar-twists, and paper flowers in all colors. The variety of color is significant because earlier Christmas trees were symbolic of the Paradise Tree in the Garden of Eden. Traditionally, food adorning these trees represented plenty while only two colors of flowers were used, red for knowledge and white for innocence. 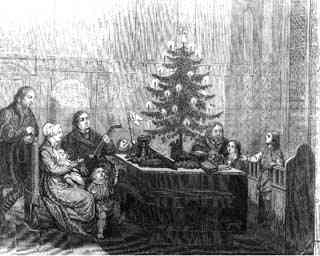 Tinsel was another holiday decoration that arrived on the scene in the 17th century and is attributed to a sad tale of a woman whose husband had passed. She was left with several children to raise and worked very hard to support them. For Christmas, she diligently created a Christmas visual to greet the children on Christmas day, but during the night, spiders spun webs through the limbs of her tree. According to legend, the Christ child witnessed the webbing and knowing the woman would be devastated to find all her work ruined, he changed to webs into silver.

Actually, tinsel was first used in Germany in 1610 and was originally made of silver. Machines were invented to stretch out the silver into thin strips soon afterward and inventors tried unsuccessfully to create tinsel from a mixture of lead and tin. However, the mixed tinsel tended to be too heavy and prone to breaking, so people reverted to the use of silver until the mid-20th century.

The Christmas tree ventured to England during the 17th century as well. It accompanied the Georgian kings from Germany, but because the British populace wasn't duly impressed with the German monarchy, nor were they wont to follow the fashions of the court, they didn't readily accept it until nearly a hundred years later under Queen Victoria's rule. The Christmas tree of that time period was bedecked with tinsel, silver wire ornaments, candles, and strung beads. It was customary to have several small trees, one representing each member of the family, set on a table with each person's gifts place beneath their tree.

During the American Revolution, in the 1770's, Hessians, German soldiers hired to fight along side the British, introduced their custom of having a Christmas tree into a pocket of American civilization. After the war ended, some of the Hessian soldiers remained and the tradition caught on within the local region. The Pennsylvanian German settlements, however, had a community Christmas tree as early as 1747.

In 1846, the Illustrated London News pictured Queen Victoria and Prince Albert with their children surrounding a Christmas tree. Due to the reigning couple's popularity, the Christmas tree was launched into a state of fashion in English society. Not to be outdone, the ever, fashion-conscious American east-coast adopted the Victorian tree into their midst.

Decorations during the 1800's were still of a hand-made variety. Young ladies crocheted snowflakes and stars and made baskets for sugared almonds from paper. Beaded decorations and tinsel were special ordered from Germany and candles were ensconced in hoops to provide a modicum of safety.

The 19th century was a flurry of activity in the history of the Christmas tree. Lauscha, in Thuringia, began to produce intricately shaped glass bead garlands as well as garlands made from common necklace materials. They were primarily available in Germany, so there was not a sufficient amount to ship outside of the country. The Christmas angel became a recurring tree topper. Small toys were tucked into the tree as gifts, but the majority remained under the tree.

The Christmas tree was quickly traveling throughout Europe, but the Mediterranean countries held fast to their own traditions. They preferred to exhibit Creche, a Nativity scene including a stable and figurines. However, they were likely to place Creche below a wooden, triangular platform tree called a ceppo.

Once again, the German evergreen resource began to suffer. It had become the height of fashion to cut off the top of a tall evergreen tree. The practice stunted the growth of the trees and eventually, killed them. Statutes were passed to prevent such destruction from happening.

By the late 1800's, Christmas trees had undergone a radical change. Lauscha was producing glass ornaments. The more a person had on their tree, the higher their status. Patriotism was an immensely popular theme in England and the angel topper was replaced by a flag. The Americans patented electric lights in 1882, and ten years later, metal hooks for safer hanging of ornaments.

The 1880's saw a rise in the Aesthetic Movement. Christmas trees no longer were contained to a table, but reached the floor and were piled high with anything that would fit. As a contrast, some people chose to opt for the opposite effect and maintained a well-balanced tree with delicately colored ornaments, interesting shapes, and minimalist style.

Changes continued throughout the 19th century. Themed trees were growing in popularity such as color themes with trees beribboned in pastels and matching ornaments or topical concepts such as an Oriental or Egyptian tree. Queen Victoria's death in 1903 sent England spiraling into mourning. With her death, the Christmas tree nearly died as well. It wasn't until the 1930's when Dickinson became the rage that the Christmas tree was popular once again. In America, immigration prompted a flux in Christmas tradition and customs.

A number of families started Christmas tree farms because of the depletion of resources. The first Christmas tree farm opened shop in 1901 and began with 25,000 Norway spruce near Trenton, New Jersey. The transplanted seedlings were harvest in 1908 and sold for a dollar a piece. 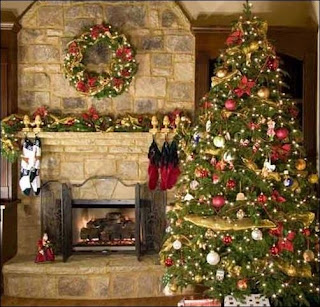 The first artificial tree made from goose feathers was made in Germany to balance the destruction of forests. It was closely followed by an American company's invention. The Addis Brush company created the first brush tree using the same machinery that they made their toilet bowl brushes with. The brush tree had an advantage over the feather tree from Germany because it was able to support the weight of heavier ornamentation.

Two world wars saw a shift in where Christmas trees and decorations were manufactured. Due to Germany's difficulty in exporting, Japan and American began to produce in order to compensate. The 1940's were a resurgence of the real and large Christmas tree. However, because of air raids, most people kept their Christmas ornaments well-protected in storage.

Patented in the 1950's, but not popular until the 1960's, the infamous Silver Pine tree was exported en masse from America. It was made of aluminum and was a modernistic idea, designed to be accompanied by a revolving light source. Each colored window would reflect different shades as the gel sphere passed by the light once a revolution. 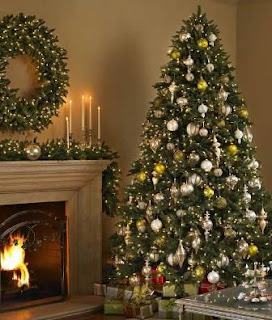 The rest of the 20th century was comprised of a return to Victorian nostalgia and themed trees. Antique replicas, plastic reproductions, and new designs arrived on the scene. There was a delight in convenience over better artificial trees making for easier clean up, yet some people still enjoy the smell and look of the real thing.
Posted by Beyond Survivor at 12/03/2012 08:47:00 am

I didn't realise there was so much history behind the Christmas tree.