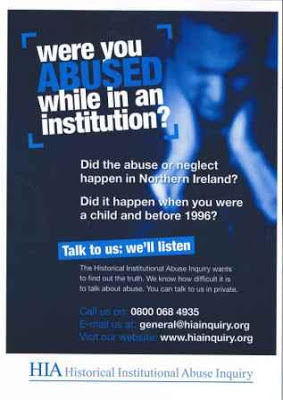 A major statutory inquiry into historical institutional abuse in Northern Ireland has issued an appeal for victims and survivors now living in Great Britain, Australia, Canada and the United States to come forward.

To date, 271 potential witnesses have made formal applications to participate in the Northern Ireland Historical Institutional Abuse Inquiry. 43 individuals have already come forward from Great Britain, but most of those who have approached the Inquiry still live in Northern Ireland.

However, the Inquiry is anxious to encourage any further survivors who suffered childhood abuse in Northern Ireland institutions but who now live in Great Britain to get in touch.

The Inquiry’s Chairman, Sir Anthony Hart, said he appreciated that the decision to contact the Inquiry could be a very difficult one for survivors, particularly if they now live outside Northern Ireland.

“We recognise that, for many potential witnesses, reliving their experiences will be very painful and traumatic,” he said. “Indeed, some will not have told their closest relatives or friends about the abuse they suffered. If they now live outside Northern Ireland, the thought of contacting the Inquiry may seem especially daunting.
“But we want to emphasise that we’re doing everything we can to make the process as easy as possible for those living in Great Britain.”

The Inquiry’s appeal is being backed by the London Irish Centre, which offers a range of services for the Irish community, including a special support service for survivors of abuse. The Centre’s Chief Executive, David Barlow, said:

“We welcome the fact that the Inquiry is encouraging survivors who now live in Great Britain to come forward.
“We are actively getting the message out there among our service users and we hope that there will be a positive local response to the Inquiry’s appeal.”

The Inquiry is offering to meet the travel expenses of those who need to give their testimony in person. If a sufficient number of witnesses come forward from any region in Great Britain, the Inquiry will consider travelling there to hear their evidence.

Potential witnesses are also offered the option of providing private testimony to the Inquiry’s Acknowledgement Forum if they don’t wish to participate in the public inquiry process.

The Inquiry is scheduled to complete its work by 2015, and to submit its report to the Northern Ireland Executive by January 2016, and Sir Anthony has urged potential witnesses not to delay if they want to come forward.
“The inquiry needs to hear soon from anyone keen to tell their story publicly or anonymously if it's to consider their case properly” he said.

In addition to making findings of fact on the scale, nature and impact of abuse, the Inquiry is also tasked with making recommendations on the steps which might be taken to help meet the needs and wishes of survivors.
To date, the Inquiry has identified more than 170 residential homes and other locations in Northern Ireland which could potentially form part of its investigation.

[1] The Ryan Commission, which carried out its work over a nine-year period, heard testimony from nearly 2,000 survivors of abuse. It published its report in 2009.

Notes
1.       Following an inter-departmental task force report, the Northern Ireland Executive, on 29th September 2011, announced there would be an Investigation and Inquiry into historical institutional abuse.
2.       On 31st May 2012, the First Minister and deputy First Minister announced the Terms of Reference for the Inquiry, and advised the Assembly of the Chair of the Inquiry and of the Panel Members for the Acknowledgement Forum.
1.       An amended terms of reference to widen the scope of the Inquiry from 1922 - 1995 was announced by the First Minister and deputy First Minister on 18th October 2012. See http://www.northernireland.gov.uk/news-ofmdfm-191012-ministers-widen-historical
2.       For the purposes of this Inquiry “child” means any person under 18 years of age; “institution” means anybody, society or organisation with responsibility for the care, health or welfare of children in Northern Ireland, other than a school (but including a training school or borstal) which, during the relevant period, provided residential accommodation and took decisions about and made provision for the day to day care of children; “relevant period” means the period between 1922 and 1995 (both years inclusive).
3.       The Inquiry will be chaired by Sir Anthony Hart, assisted by Panel members Geraldine Doherty and David Lane.  Acknowledgement Forum Panel members are: Beverley Clarke, Norah Gibbons, Dave Marshall QPM and Tom Shaw CBE. Biographical details are available on the Inquiry website: www.hiainquiry.org
4.       The Inquiry is formally established under The Inquiry into Historical Institutional Abuse Act (Northern Ireland) 2013 which became law on 19th January 2013.
5.       The Historical Institutional Abuse Inquiry is an independent inquiry. The Inquiry welcomes the fact that its appeal for potential witnesses has been supported by many external organisations. However, where any external organisation is quoted as supporting this appeal in any press release issued by the Inquiry, the inclusion of such a quote should not be interpreted as indicating any link between the Inquiry and that organisation. The Inquiry remains fully autonomous of any external organisation. 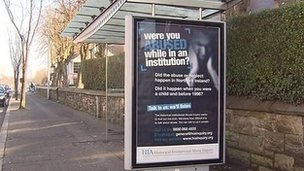