Most people who suspect children are being abused do not report their suspicions quickly enough, a children's charity is warning.

The NSPCC is urging people to act on their concerns rather than waiting for certainty "which might never come". 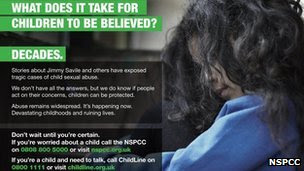 Fewer than one in five would report their suspicions straight away, a new survey for the charity suggests.

"Jimmy Savile was allowed to abuse in part because people were not certain what they were seeing was abuse, and in part because the children themselves were not listened to or believed," she said. "It's vital that people listen to what children are saying, and that they report concerns immediately even if they are not certain."

A report released on Friday revealed a half a century of abuse by the television presenter Jimmy Savile in hospitals, children's homes and BBC studios.
Hundreds of victims came forward in the autumn after allegations against the media figure were broadcast.

More than 200 crimes were recorded across 28 police force areas and almost three-quarters of the victims were under 18, the report said.

A survey of 2,000 people carried out by YouGov for the NSPCC online last week found that 17% of people would report concerns as soon as they arose.


The charity says its own data shows that almost half of those contacting its helpline wait more than a month to get in touch, with some waiting much longer.

It is launching a TV campaign called "Don't wait until you're certain", urging people to act quickly on their suspicions.

Peter Watt, from the NSPCC, said: "Child sexual abuse is not a problem that died with Jimmy Savile. It is a problem that continues today, with children across the UK suffering at the hands of a minority of adults.

"Whilst the uplift in reports of abuse and new figures indicating that people are more willing to speak out is very welcome, it's also clear that people are still waiting for that elusive certainty before taking action. People clearly have the desire to act but are unsure how or when to do it.
The truth is you will probably never be certain because of the hidden nature of abuse, especially sexual abuse."
Posted by Beyond Survivor at 1/14/2013 05:14:00 pm