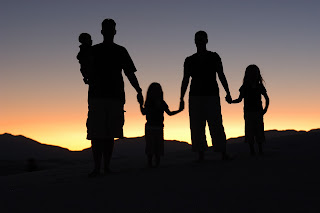 For survivors of child abuse, deciding how or if you should maintain relationships with your family of origin (family you were raised in) can be a difficult decision.  The survivor may change his/her mind many times as they contemplate the repercussions of the decision.   Most child abuse survivors find they have a mix of people who support them and those who don’t in their families.  This is when it is helpful to remember that your family is not ‘all or nothing’.  You can maintain relationships with some family members while losing connection to other family members.  The closer the relationship was when you were growing up, the harder it will be to let go.  Some child abuse survivors find that it’s easier to end relationships with people who don’t believe you were abused than those who believe it but don’t support your healing.

Personally, as a survivor of child sexual abuse, deciding if and how to maintain a relationship with my family members was one of the longest struggles in my healing journey.  When I told my parents that I had been raped by a family member, they believed me.  I was elated!  My biggest fear was that no one would believe me and that I’d be forced to sever any contact with my family.  Between my therapist and books I had been reading I learned when child sexual abuse is perpetrated by a family member, sometimes other family members don’t believe the survivor.  I had even created an Action Plan on how I would handle the situation if they didn’t believe me.  I was as prepared as I could be to handle what I thought was the ‘worst case scenario’.

It didn’t even occur to me that my parents would believe me, but then expect me to go on with life exactly as it was.  I was told to keep it in the past and to “put it on a shelf and forget about it”.  When I said that I would never appear at family functions with my rapist again, I was told that I was being ridiculous and too demanding.  It would be too difficult to make sure he didn’t show up to family events and wasn’t I forcing them to choose between him and me?  How could I expect everyone else to change their lives around for me?  I was so hurt and shocked.  I honestly thought the worst thing that could happen after my family knew of my abuse was that they wouldn’t believe me.  It never even occurred to me that they would believe me, and then not respect my needs or support me.

Not only was this a surprise for me, I was pretty new to the idea that I had boundaries and rights that I could and should protect.   Growing up in an abusive home, I didn’t know that I deserved or had rights of my own.  It felt difficult and awkward to begin asserting myself as an adult.  It became even more difficult to assert myself because when I did I was called selfish and unreasonable.   The same people who told me that my need to never see my rapist again was selfish would then end it by saying they love me.  It was so confusing.  I wanted to believe that they loved me, but how could I when they still wanted me to celebrate holidays with my rapist?  I needed them to pick a side.  It took me several years to see that by not supporting me, they were picking a side.

When I finally chose to end my relationship with my father and stepmother, the decision was actually pretty easy.  It was the repercussions from that decision that were so difficult.  Friends and family members (even those who were abused themselves) couldn’t believe I was CHOOSING not to have contact with them.  “But he’s your father.”  I would hear over and over again.  “He’s not the one who hurt you” was another torturous phrase.  He was hurting me by denying me the dignity of never having to hear about or see my rapist again.  Even some books I read on recovering from child sexual abuse encouraged survivors to do whatever they had to do in order to maintain their relationship with their family.

It was sad and lonely at first.  I started lying to friends about my family and how I spent my holidays because it was easier than explaining the truth.  Also, I was worried that I would be told, yet again, to do whatever I had to do to keep a relationship with my father.  After a few years, I began to slowly admit the truth to one friend at a time.  Surprisingly, many of my friends confessed to envying me.  They wished that they too could spend the holidays alone.  Some of them were abused as children and others just felt the holidays were too chaotic and wanted to relax instead.  Finally receiving support and understanding, helped me feel stronger and that I could trust myself to make the right choices for me.

It’s been over 15 years since I’ve spoken to my father and other members of my family.  Sometimes I still miss them.  I’m also beginning to see why some books stress the importance of maintaining relationships with our family of origins.  At times I feel groundless; as if by ending my relationship with my family members I’ve lost part of who I am.  Humans are social beings, we are storytellers and we need to hear who we were and who we are from others.  It’s harder to find that in people outside your family or origin, but it’s not impossible.  And it is certainly no reason to maintain toxic relationships.

If you are questioning your family’s support, consider how you feel when you are with them and how you feel after you spend time with them.  Do you feel embarrassed or humiliated with them?  Do you feel drained, angry or defeated after talking to them?  Do you question yourself during or after seeing them?  Just remember that you are worthy of a family who loves and supports you.  That family is not always the family you are born into.  Many survivors find their first sense of family from friends and other survivors.   You deserve to feel the sense of safety and acceptance that comes from surrounding yourself with people who support and encourage you.

Cosima Zehring is the founder of Eternity’s Sunrise (www.eternitysunrise.org) an online magazine for survivors of trauma.   Visit our website to find information, support and tools for the tough road of healing after abuse.

Email ThisBlogThis!Share to TwitterShare to FacebookShare to Pinterest
Labels: Guest

Beyond the tears said...

Excellent post! This sums it up: "It never even occurred to me that they would believe me, and then not respect my needs or support me." I've learned that DNA = Do Not Associate in order for me to continue on my personal healing journey. Cheers, Lynn

This is an amazingly detailed story of your life of abuse and it is so heartfelt that it will help so many others to relate there pain and abuse to yours and hopefully to stop been victims and to become survivors.

I can personally relate to the loss of family and friends and as hard as that is ,it actually is the best thing that you can do as you realise that you dont have to live a life of lies or pain that its ok to be you,and to enjoy life

I wish you all the best in your future and in helping others ,you are an inspiration

Thank you Lynn for your comment. I love your definition of DNA. I wish you the best on your healing journey.

Thank you Lurleen for your kind words. I do hope that in sharing my story other survivors will realize they don't have to live a life of pain. Thank you for your well wishes and I wish you the best as well.

Please find my page "child Predators - Don't be Fooled. I am a victim who was never given validation. I recently found out my 4 children have been molested. It prompted me to start my page. Had I known what signs to look for, maybe I could of prevented it. I would love for you to visit my page, like it and share, give suggestions, advice and anything that maybe helpful. Trying to get some interaction going as well. I figure if I can reach one parent, save a child. I am making a difference..